On behalf of the Classical Bells organization, we would like to sincerely thank each of the directors, ringers, helpers, and especially guest conductor Fred Gramman for another amazing year. BronzeFest 2018 will be hosted by Kettering Advent Ringers in Kettering Ohio. Thank you to those who journeyed out for the show!
Classical Bells has been invited to participate in BronzeFest since it’s inception 25 years ago. “It’s a unique opportunity to work on advanced level repertoire with a world-renowned conductor,” said Darlene Ebersole, who directs Classical Bells. “This year we were thrilled to have Fred Gramman coming to direct us.” Gramman, an internationally known composer and arranger, is the Director of Music and Organist at the American Church in Paris, France. Handbell ensembles from Ohio and West Virginia joined Classical Bells and other Michigan groups from Kalamazoo and Midland. The groups had worked individually to prepare the music, and rehearsed intensively with Gramman throughout the day on February 20 to enhance their performance before the concert on February 21.

“It’s quite rare to have this many advanced level groups together in a mass ringing performance,” Ebersole said. “We’re extremely pleased to be able to bring this event to the Detroit area.” 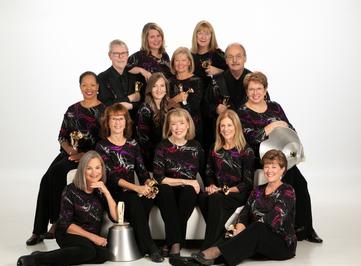